The Power of Finding Purpose

I clearly remember the day my professional life changed forever. On that day in June 2016, my career received a major purpose that has—and will—motivate me for the rest of my life.

I was enrolled in the Entrepreneurship Master Program through the Entrepreneurs’ Organization (EO) at MIT. One of our instructors, Verne Harnish (co-founder of EO), shared a powerful story about the 2008 recession. During that time, Verne’s business was really hurting, but despite financial uncertainty, he made such a significant pledge to his church. Simply put, there was no way he would be able to deliver on the promise unless he found a way to turn around his business.

After hearing Verne’s story, a lesson stuck in my head: if you have a purpose—if you make a promise to something or someone beyond yourself and it really matters to you—you will find a way to make it happen, no matter how difficult the challenge may seem in the moment.

Purpose Can Come When You Least Expect It

Fast-forward to August 2016, when I was nearing my 40th birthday. Thankfully, I didn’t have a midlife crisis, but for me, going to Tony Robbins’ Business Mastery event seemed like a possible way to gain even more clarity about my life and about my purpose.

From a company standpoint, 2016 marked the second year that InfoTrust made the Inc. 5000 list of the fastest-growing companies in the U.S. That was a great achievement, but as an organizational leader, the initial novelty and excitement of accolades wears off quickly. I found myself asking, “Is this it?” I had unshakeable certainty that we were going to accomplish our business goals, but what was going to happen next? What would keep us growing and moving forward? All of this was at the back of my mind as I sat through the event.

Then, during one exercise, Tony posed the question, ““How are you going to spend your money when you are financially successful?”

My answers primarily focused on ensuring that my family has enough resources to pay for future generations’ education. To this day, when I close my eyes to visualize my future, I envision taking my grandchildren on college tours, visiting them in college, and giving them a foundation that they can build upon for the rest of their life.

As we completed this exercise, Robbins asked attendees to raise their hands and share. Many listed items such as:

All of the things people shared felt notable, even inspirational, but something was missing.

Then, something incredible happened that helped me find my purpose. To this day, even as I am writing this, my heart starts racing, and I feel myself tearing up.

Tony called on a woman who said, “Tony, I want to support this organization, Operation Underground Railroad. It was started by an ex-homeland security guy named Tim Ballard. The mission is to rescue children—girls, primarily—from sex slavery. This is a huge issue worldwide, and sadly it’s a growing issue in the U.S. Tim started a private organization so they do not have to stay within the boundaries of the FBI and the Department of Homeland Security. They want to do it worldwide. “

“How much does it cost to save a child?” Tony asked.

“It’s very expensive. They go undercover because they want to collect all the evidence needed to put the bad guys on trial without asking the children to testify in open court. They do raids worldwide that require $10,000 to $12,000 per child saved.”

Tony started to move to another attendee, but before he could, an older man stood up.

“Tony, I grew up in a Catholic orphanage. I can’t match your gift; what you just did is amazing. From my wife’s and my savings, here is another $10,000. Have them save one more child.”

I was fortunate to be sitting in one of the front rows, so I could see Tony’s face. The 6-foot-7 giant of a man started to cry uncontrollably in front of a room of more than two thousand businesspeople.

Almost instantly, people started standing up on their chairs with checks in their hands. I felt like I was transported into the film Dead Poets Society when a class full of students climb on their desks to honor their teacher with the salute, “O Captain, My Captain.”

Enthusiasm radiated throughout the entire room, and we had a collective emotional breakthrough. As people climbed on their chairs and pulled out their pocketbooks, we became united in a singular purpose.

The Purpose that Brought Us Together

It’s a rare feeling to be in a room where everyone agrees, but Operation Underground Railroad (OUR) brought an entire room of strangers together. I’m convinced that it’s because the cause was so just, so obviously right, that everyone could understand it. It’s especially easy to see why this mission would resonate with parents, but even people without children can relate to the universal truth that these evils should not be happening.

As Verne taught me, having a purpose means that you will find a way to make the things you care about happen, no matter how impossible they may seem. OUR is a textbook example of a purpose-driven organization. Ending child sex-slavery certainly isn’t easy, but the strength of OUR’s conviction (and that of its supporters) has generated incredible results.

Over the last 4 years, OUR has raised millions of dollars, allowing the organization to bring the cost of their rescue missions way down. In fact, they now estimate that a donation of $1,200 can save a child’s life. That number alone shows that the organization is making an impact. It’s a tangible, quantifiable indicator that shows people just how much power they really have to make a difference.

In the 6 years since OUR was founded, they have rescued more than 4,100 children and assisted in the arrests of more than 2,300 traffickers worldwide. Their organizational partners have collectively helped rescue more than 10,000 enslaved, exploited, or at-risk victims. This story has impacted and inspired so many people that there’s even a Hollywood film coming out, starring Jim Caviezel as Tim Ballard.

Recently, we’ve seen headlines indicating that we’re making headway in the fight against human trafficking. In Ohio in October, the U.S. Marshalls recovered 45 missing children as part of an operation called “Autumn Hope.” Ohio Attorney General David Yost said that this is the largest anti-human trafficking effort in the state’s history, and more than 50 agencies were involved in the operation, resulting in 109 total rescues and 177 arrests.

Imagine starting an organization that has already saved the lives of 4,100 children. That’s what the power of purpose can do. Still, the war on child sex-slavery is far from over. But I’m confident that with purpose as our guiding force, we can keep accomplishing our goals and making a real difference in people’s lives.

There is no shame in making money. Money is an amazing resource, and it would be hypocritical to say that, in this world, having this resource does not provide you and your family with opportunities for an easier life, better food, better healthcare, the best education, etc. However, there is a fundamental problem in making money just for the sake of accumulation and growth.

Instead, it’s important to reframe why you are making money. How hard would you work if you knew that every $1,200 you donate saves the life of a child? How does your perspective on money change when you think about it as a means to pursuing a purpose?

P.S. We are publishing this on Nov. 3… Election Day in the United States. The InfoTrust Foundation just donated another $12,000 to OUR. 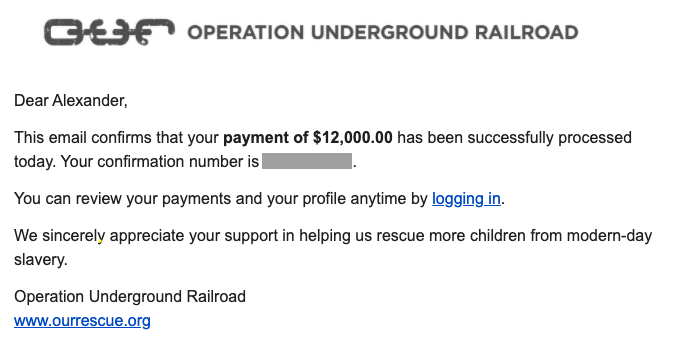 We may all disagree in our politics but, we all want our children—and all children—to sleep in their beds tonight. Let’s make our purpose today about supporting OUR in bringing 10 more children home.

Learn more about the InfoTrust Foundation. 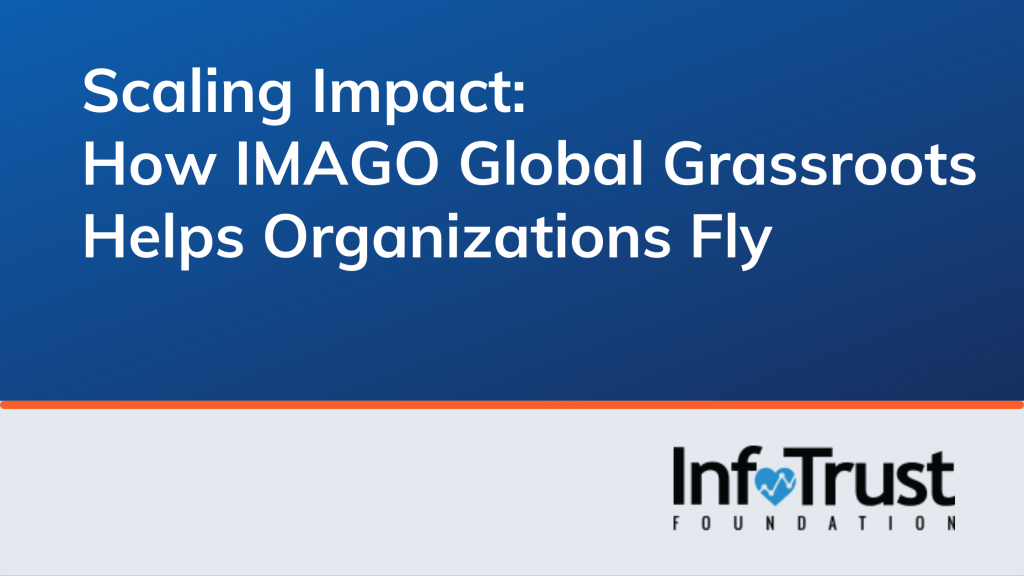 For COO of IMAGO Global Grassroots Johanan Rivera, building a world in which the innovations and solutions developed at the grassroots level can reach… 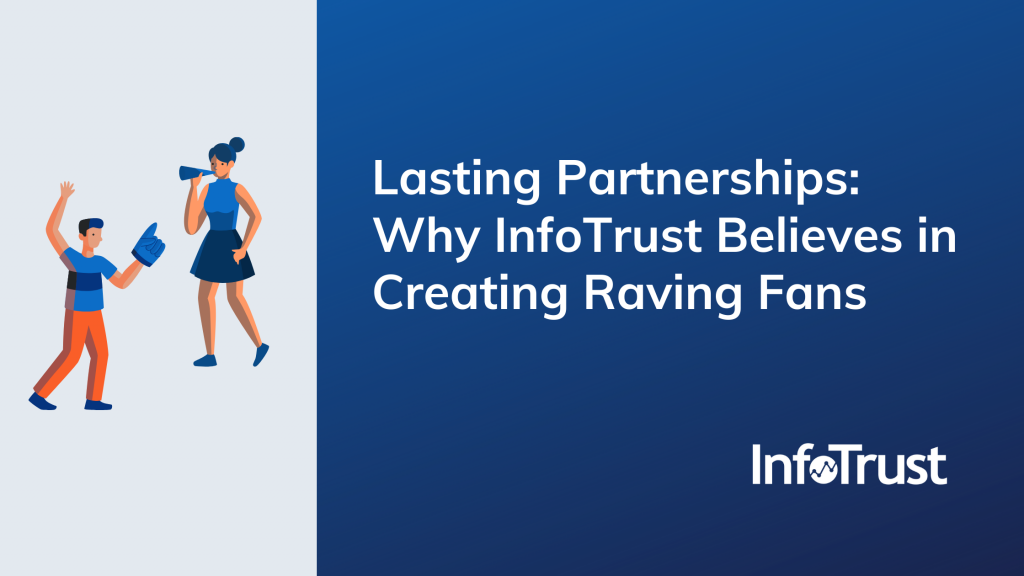 Successful customer retention involves more than giving the customer what they expect. It means exceeding customer expectations and turning them into raving fans. It’s… 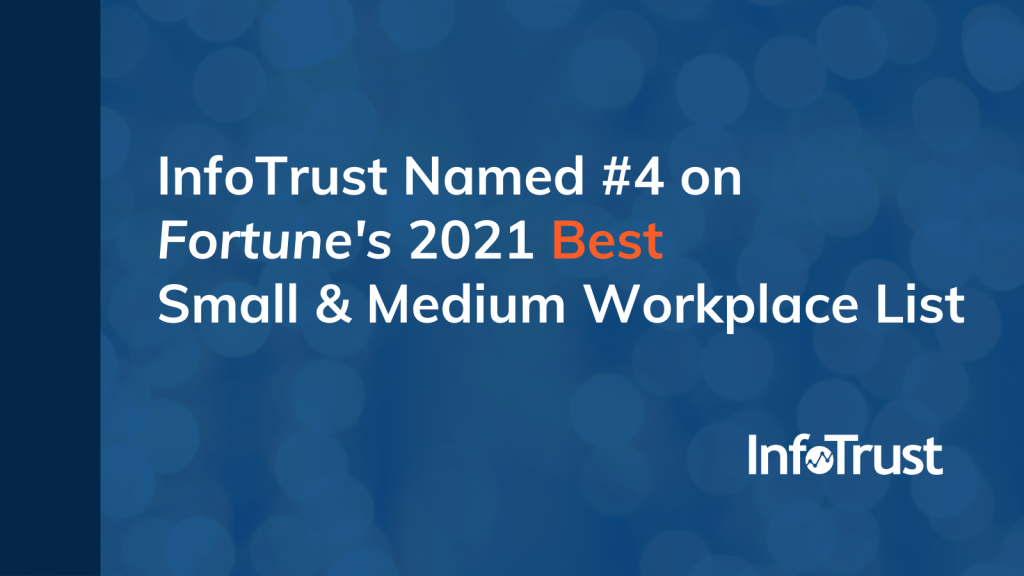 InfoTrust is excited to share our recognition for our exceptional company culture by being named a Fortune Best Small & Medium Workplace in 2021. InfoTrust… 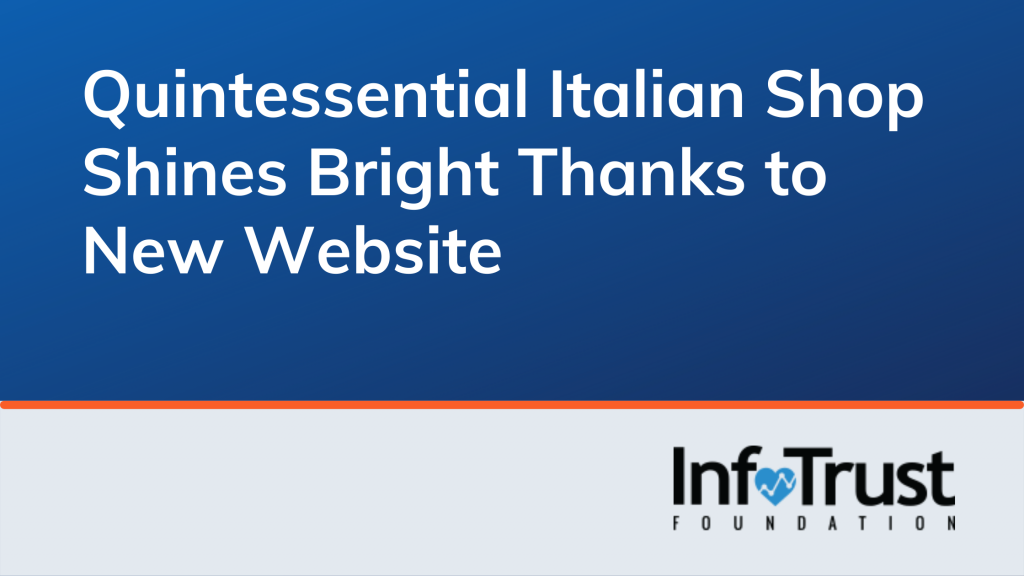 In 2002, Terrie Viets had a vision: to bring a bit of Italy home to Cleveland by way of opening a business. But not… 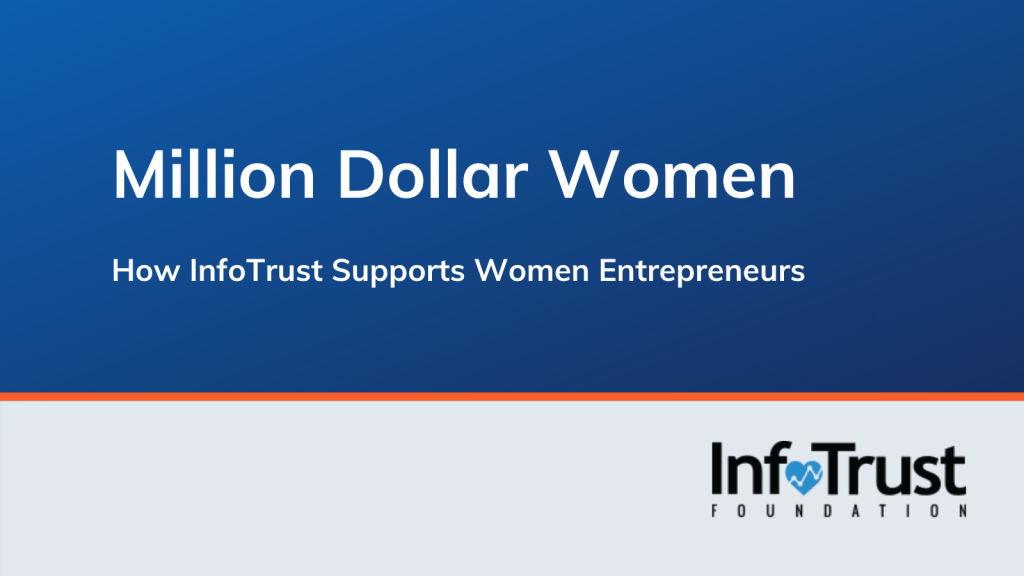 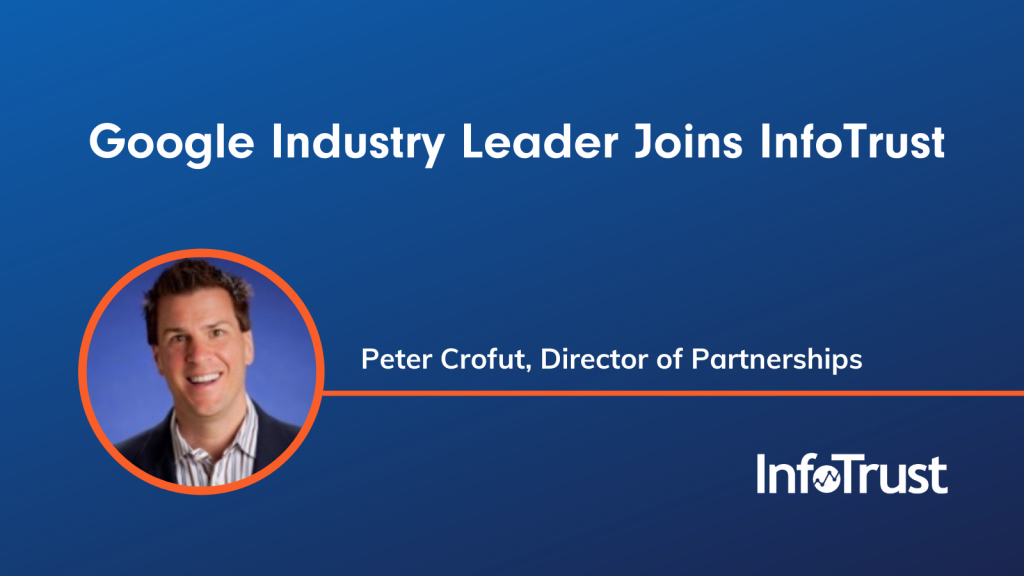 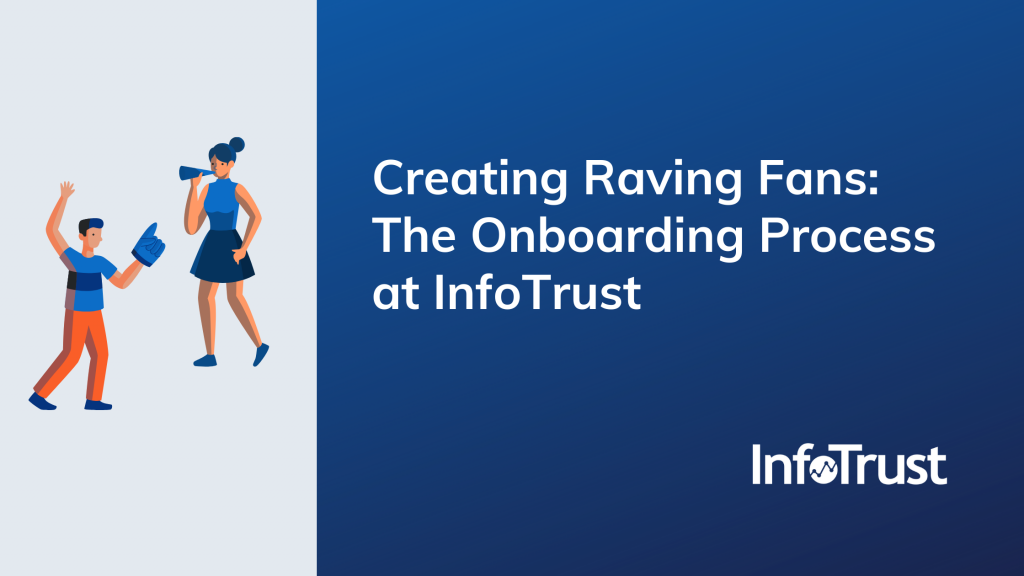 Each business has its own way to onboard new clients. Perhaps there is a meet-and-greet webinar or care package with next steps sent to… 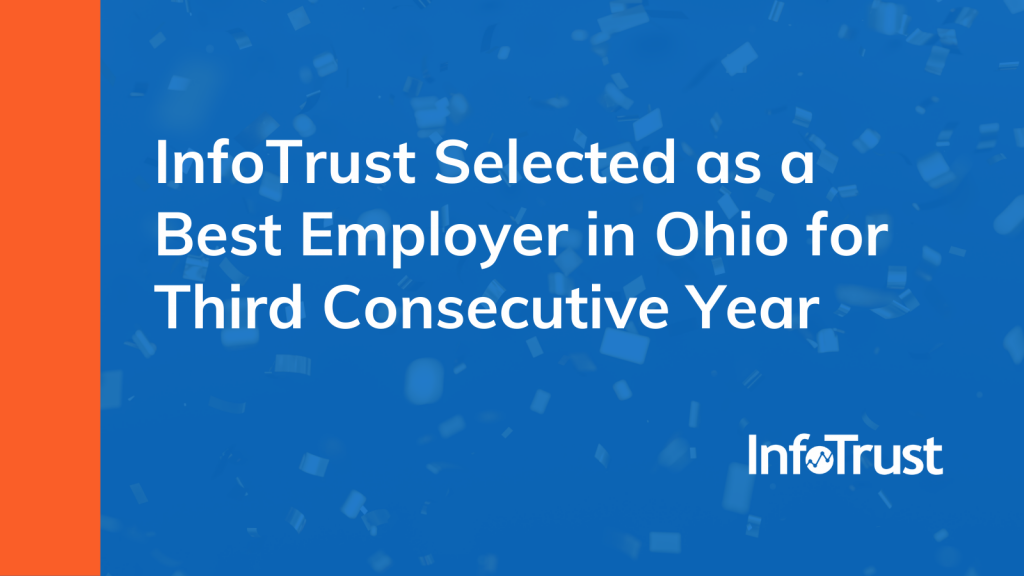